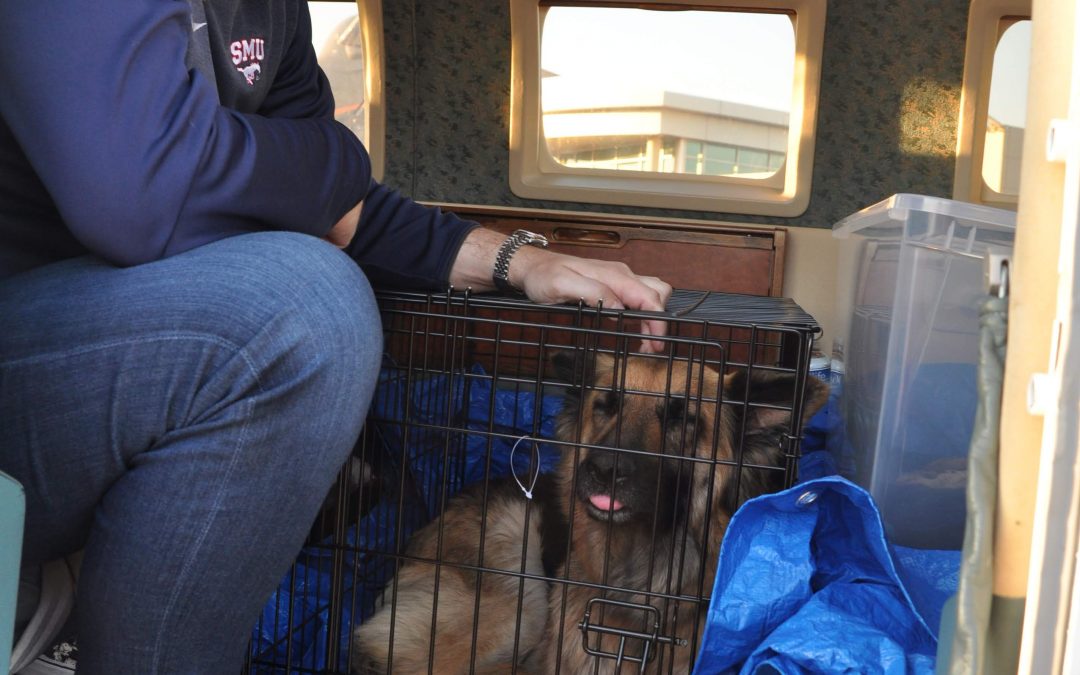 Gretls’ story began in TX, where she was found as a stray, wandering the streets. When she was picked up by Animal Control, it was clear she was VERY pregnant. That very day Gretl gave birth to 11 pups. You have to understand, it’s hard enough on animals when they’re in a shelter, but to have brand new babies there, it’s not healthy. When a local volunteer learned of this she contacted many people & Placing Paws Rescue stepped in. We knew we had to help. We agreed to cover all of the vet expenses & bring her to Illinois. Together, we reached out to one of our amazing specialty fosters & without batting an eye, she agreed to step up. The rescue is officially in motion.

IT TAKES A VILLAGE: Coordinating getting Gretl & her family out of the shelter & into temporary foster, was urgent. A plea to Pilots N Paws was launched & immediately, Fred answered our prayers. We should note that within another few minutes, a second PNP pilot offered to help! Emails, texts & phone calls were in rapid fire among everyone involved. Gretel’s’ family was moved into temporary foster & an amazing foster, at that. Gretl & babies were closely monitored & seen by a Vet to ensure that they were healthy. 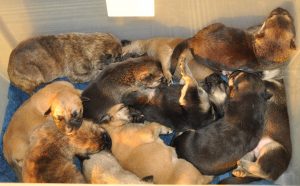 None of us slept Saturday night from the excitement knowing we’d be meeting the family the next day. On Sunday morning, they boarded their first leg to freedom & were being transported to Iowa. Pictures, updates and video being shared at warp speed! So many worries about how Gretl & the babies would do, making sure mama got a potty & a nursing break between flights, but everyone involved are pros & know the drill. It’s truly magical how everyone knows their role and responsibility.
THE HANDOFF: Fred and Tami landed early, anxiously awaiting the first leg to arrive. With Gretl & puppies the only ones on the next transport, they were first off. Lots of pictures shared and plenty of time to stretch her legs and feed the babies. Next up, a quick, one-hour flight to the Chicago suburbs!

THE EAGLES HAVE LANDED: Everyone arrived at the airport early, making sure to be there for their approach. Clearly something big was going on and when the manager understood the magnitude of what was about to happen, he made sure our vantage point was nice and clear. He permitted us to go outside with him & pointed out Fred’s plane, off in the distance. It was go time! Watching them touch down and taxi…it still brings tears to our eyes. I keep replaying the exact moment when I looked around & thought to myself “it took a village to make this happen. This is what rescue is all about.” EVERYONE had goosebumps, including the airport staff.

THE INTRODUCTION: The door opened & Gretl is the first thing we see & she’s almost smiling. Fred & Tami had HUGE grins on their faces & were actually thanking us for saving this family! The pictures and videos were documenting every second of their arrival. Gretl came out first & acted like it was no big deal & then the bin of puppies made their debut! Momma came right over to make sure everyone was accounted for, and then went back to saying hello to everyone there. I remember seeing the fosters’ young boys absolutely giddy with excitement…true animal lovers at such a young age. We finally moved inside and had a chance to learn more about Fred and his passion for flying animals in need. It’s incredible what he & other #pilots do for #PNP. They afford the opportunity of better lives for these animals. Animals that may never be adopted & are basically invisible. After the foster mom loaded everyone into her car, we said our goodbyes to our new friends. It was an absolutely gorgeous night & as the sun was setting, we watched Fred and Tami take off into the sunset. Again, magical. Rescue is tough. But when you have people with giant hearts like Fred, it lets us know there is an entire community of like-minded people.
The rescue community is small, but mighty. The networking that goes on is fierce and filled with passion. Relationships and trust are established, not taken for granted and egos are always left at the door.