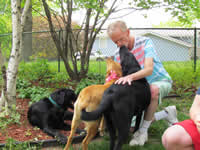 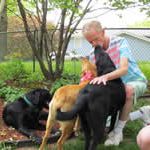 We lost a precious part of our Placing Paws family. John Vicik passed away January 28th. Several years ago John stepped up and fostered a pregnant dog named Buttercup. We offered him a whelping box but he declined because he wanted to build his own. That whelping box has since whelped countless other litters. He fostered Buttercup through delivery and then her and her six babies for 8 weeks until they were ready for adoption. He did an amazing job!

He ended up keeping mama who he called Maggie and also kept the mamas girl of the litter named Macy. At their one year birthday he hosted a birthday party in his backyard. John was a wonderful, kind and gentle man. It was our honor and pleasure to work with him and welcome him into our rescue family. He will be dearly missed by so many. Rest in Peace John. 1-28-16.